What is the victims’ rights amendment known as Marsy’s Law that passed in November, 2018?

How will Marsy’s Law NC provide these rights to victims?

Isn’t giving notice of an opportunity to be heard in court procedures going to interfere with the court or slow the process down?

Will the crime victims amendment cost North Carolina too much money?

Some opponents say this amendment is not needed, that North Carolina already provides rights for victims of crime?

Does the victims’ rights amendment take away from the rights of the accused?

Where can I read the text of the amendment?

Will Marsy’s Law simply allow for wealthy victims to hire their own attorneys for proceedings involving their case?

How will Marsy's Law impact North Carolina's juvenile justice system? Will it interfere with the recent Raise the Age legislation?

What is the victims’ rights amendment known as Marsy’s Law that passed in November, 2018?

Last November, North Carolina’s voters overwhelmingly voted to strengthen rights for victims of crime - giving crime victims’ rights equal authority in the state Constitution already given to the rights of the accused and convicted.

The amendment, known as Marsy’s Law, is a bipartisan victims’ rights initiative which seeks to amend state constitutions like North Carolina that lack guaranteed enforceable protections to crime victims. It passed in North Carolina by more than 60 percent of the statewide vote - the most of any of the six amendments voters considered on the 2018 ballot.

How will Marsy’s Law NC provide these rights to victims?

It guarantees equal rights to crime victims in a number of important ways including:

Isn’t giving notice of an opportunity to be heard in court procedures going to interfere with the court or slow the process down?

Legal experts believe that notifying victims and allowing them to be participants in the process will not significantly delay court proceedings. In those cases where victims have opted in to get notice, they may be heard briefly in a hearing to determine the conditions of release - but they have also historically been necessary witnesses in most cases and are often called to testify in trials.

The case is now, and will be, between the State and the defendant, and the DA will continue to make decisions about how and when the case will be resolved. This law also specifically says that it does not change the authority of the District Attorney. The victim will not be a party, but recognized as more than a bystander. The victim will not be able to veto or override the decision of the constitutionally empowered District Attorney, whose job it is - now and under the proposed amendment - to balance all of the competing interests.  Marsy’s Law will ensure that these rights are guaranteed to victims and their families.

Will the crime victims amendment cost North Carolina too much money?

There has been some speculation about cost - but it was often based on an early and different version of the legislation.  The fiscal note developed by nonpartisan fiscal legislative staff was debated as part of the law that passed both chambers of the General Assembly with broad, bipartisan support in June 2018.

Any additional cost associated with this amendment will be to upgrade notification to victims of crime about custody status of the accused or proceedings related to their case.  Based on vote results among members of the General Assembly as well as voters in November 2018, North Carolinians agree that we should already be doing this for crime victims and their families.

In comparisons to other states that have history implementing similar Marsy's Law legislation, like Illinois and California, there has been no indication of significant increased costs - and neither state has needed to allocate specific funding for implementation. In addition, many prosecutor's offices in North Carolina already have ways and technology in place to provide victims with notice and information.  While Marsy’s Law may add a few responsibilities to DA’s and others in the court system, other than notice, there is little or no cost involved in the new law.

Some opponents say this amendment is not needed, that North Carolina already provides rights for victims of crime?

While there are some rights for crime victims in the Constitution, they are limited to statute, and do not carry an enforcement provision - meaning victims do not currently have any recourse when their rights are violated.  Simply put, if the rights of victims are found in statute and the rights of the accused and defendants are found in the Constitution, defendants rights will always carry more weight than those of the victims.

The current protections adopted 20 years ago for victims were a good start, but there are gaps in victim protections - they are not always consistently applied from county to county and regionally.  This amendment will provide specific, uniform, and enforceable rights statewide so that victims are guaranteed to receive the same rights that those who are accused and convicted have.  Under Marsy's Law, victims of crime will also have their rights in the Constitution - and not be subject to changing legislative laws, guaranteeing them stronger rights than they have today.

Does the victims’ rights amendment take away from the rights of the accused?

This amendment takes nothing away from the rights of the accused.  In fact, this amendment does not and is not intended to negatively impact the rights of the accused or convicted and will take nothing away from the current Constitutional rights criminal defendants have to access fair trials and due process. Marsy’s Law simply elevates victims to the same level in the Constitution, establishing “co-equal” rights for victims alongside the accused.

Where can I read the text of the amendment?

The full text and history of the bill are available here. 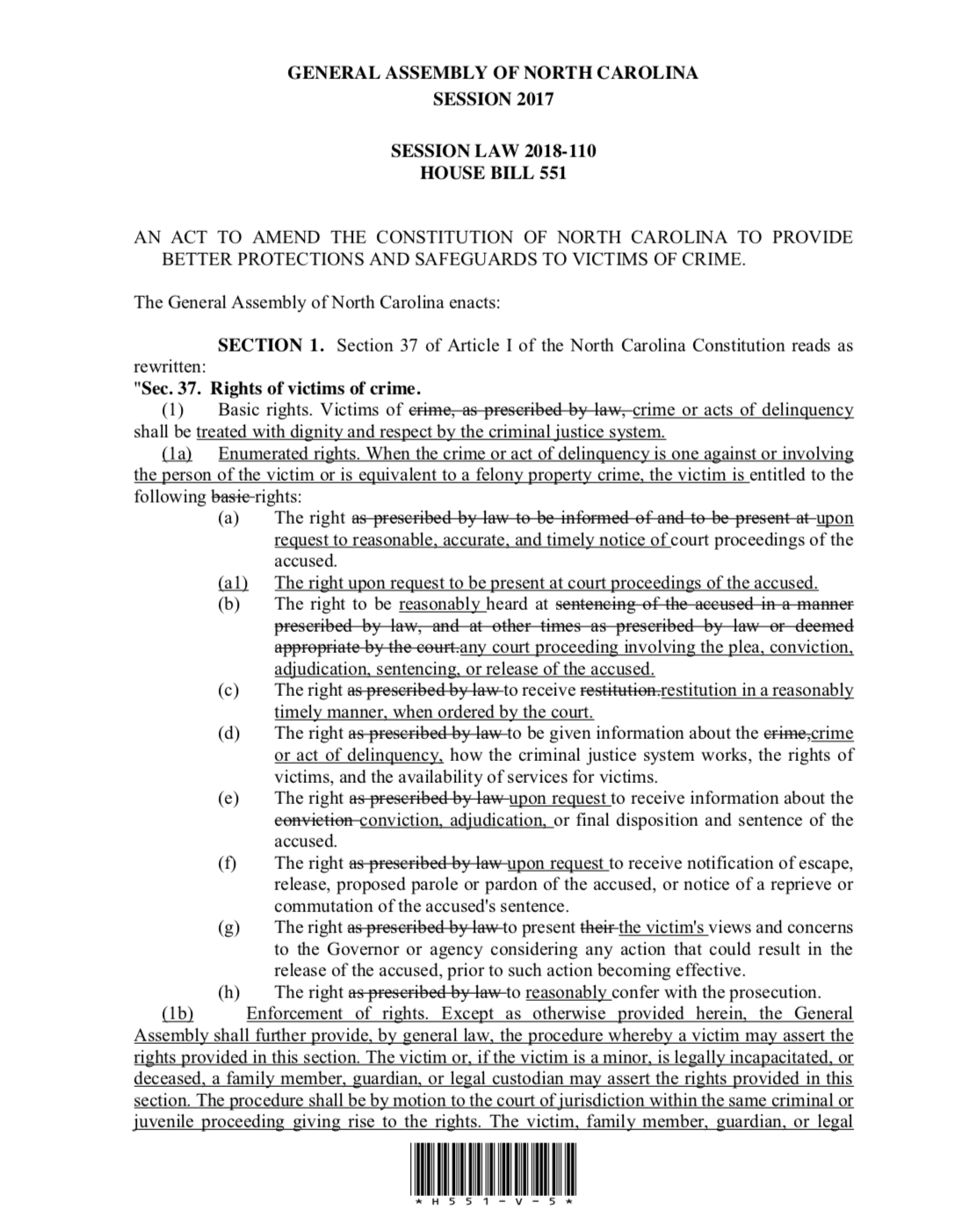 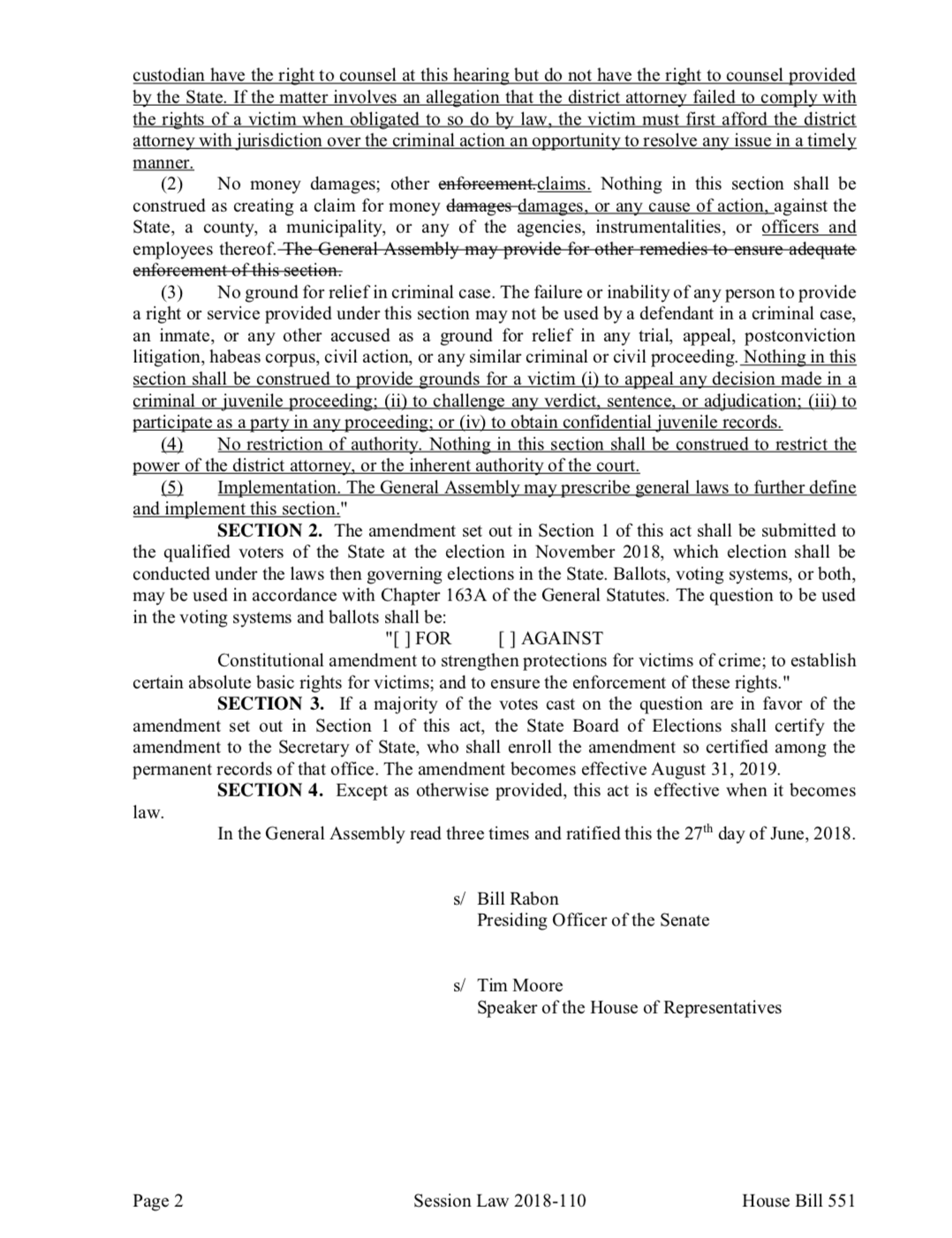 Will Marsy’s Law simply allow for wealthy victims to hire their own attorneys for proceedings involving their case?

Marsy’s Law does not allow for citizens - including victims - to hire an attorney to prosecute the case. Victims may have an attorney to assert their rights as a victim - or appear in their place if they choose not to be there in person - but the law specifically says that it does not change the authority or role of the District Attorney.

The victims’ rights amendment does not take away any rights of the accused or convicted to access fair trials and due process.

How will Marsy's Law impact North Carolina's juvenile justice system? Will it interfere with the recent Raise the Age legislation?

Marsy’s Law has no bearing on North Carolina’s recent Raise the Age legislation and doesn’t take away from any program - for juveniles or adults. This amendment does not undermine the rights of young people as it has no effect on how defendants/respondents in juvenile cases are treated. Marsy’s Law simply ensures that all victims of crime have equal rights whether the perpetrator of the crime is a juvenile or an adult.

There really should be no difference in the way victims of crime are treated because of the age of the offender.

Marsy’s Law is not expected to significantly change the current methods of operation of Juvenile Court, even though Raise the Age will increase the volume of cases.