To-date, 42 local communities have passed resolutions in support of legislation in the General Assembly that will strengthen victims' rights in North Carolina. In April, two more counties - Stokes and Lee; and two more towns, Rockwell and China Grove - passed resolutions urging the Legislature to pass the victims' rights bill known as Marsy's Law during the upcoming May Legislative session.

“The Town of Rockwell is proud to support Marsy's Law. We encourage all of our citizens to join in this commitment to protect the rights of North Carolina crime victims," said Rockwell Mayor Beauford Taylor.

Last session, the state House passed House Bill 551, Marsy’s Law, with an overwhelming bipartisan vote. The bill would give victims of crime important rights like notification of the custody of the accused and the right to be heard during a court proceeding like a sentencing or bail hearing. It can be considered by the Senate as early as this May’s legislative session and, if it passes, will be sent to North Carolina voters to decide as early as next November. 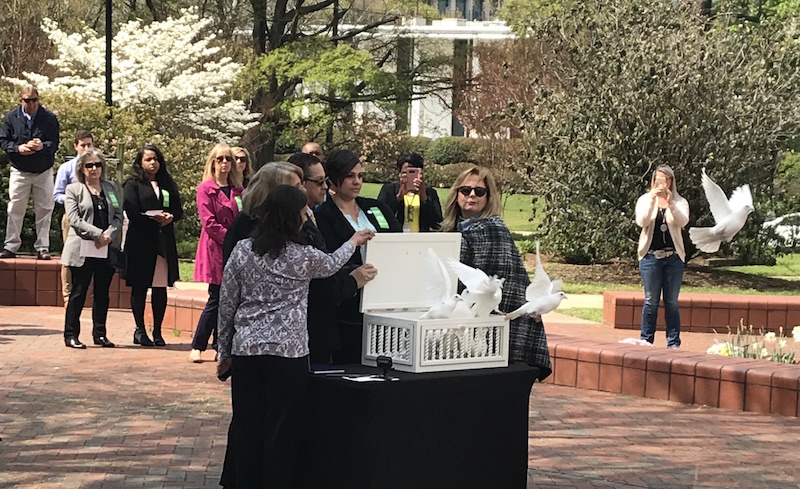 Across the nation, the second week of April 2018 was designated Crime Victims’ Rights Week. Citizens, friends and family members who have suffered from crime - often violent and always against their will - were recognized throughout the week with the color purple.

The week is a place in time where communities, students, governments and law enforcement were asked to reflect upon what victims of crime endured from the actual crime and its aftermath - touching their friends and families in personal and permanent ways.

In North Carolina, the campaign to strengthen victims’ rights in the state constitution, Marsy’s Law for NC, participated in a number of ways ranging from urging elected officials statewide to support for victims’ rights legislation in the state constitution to participating in important events like the NC Victims’ Assistance Network ceremony. The NCVAN event served as a gathering for advocates to hear first-hand from a woman who lost her sister to homicide on a college campus. Through her tears, she shared the daily devastation that is a constant reminder of the crime. She shared how her own children are forever changed; fearful as they grow older and start their own lives as they relive the horror of their loved one’s murder every day. She highlighted that homicide does not just impact the victim, but the family and the community left behind.

The annual week is an opportunity to reflect on the very human and personal aftermath of crime. For the Marsy’s Law campaign, it’s also a time to remind elected officials and voters about the important legislation that will strengthen victims’ rights statewide giving victims of crime guaranteed rights in the constitution just as the accused and convicted are already afforded.

The state’s General Assembly has the opportunity to consider the legislation in the upcoming May session - that would then send it to voters to decide.  Important rights like notification of custody of the accused and allowing victims - if they choose - to be part of parole or sentencing hearings.

North Carolina’s victims of crime deserve this guarantee in the state constitution - giving them the dignity and respect they deserve during Crime Victims Rights Week and throughout the year.

These two counties join the growing number of North Carolina communities – more than 35 to-date – that have passed proclamations supporting Marsy’s Law for North Carolina.  Marsy’s Law is legislation, known as House Bill 551, that will give an equal level of rights in the state constitution to victims of crime that are already given to the accused and convicted. Rights that include notification of custody status of the accused or even being included and heard during court proceedings like plea deals or sentencing proceedings.

The bill has overwhelmingly passed the North Carolina state House and could be considered in the state’s Senate as early as Spring 2018.  Once it passes both chambers of the legislature it will then be sent to voters to consider as early as the 2018 election cycle.

It’s common sense that a victim of crime be given at least the same rights as their attacker – and Marsy’s Law would make that guaranteed by state law.